A bit of news

I received a Call. I was notified of this on December 27, but I didn't want to say anything until I received the paperwork and it became official. The paperwork arrived today, and I've had a bit of a chance to look it over. The Call is to Grace Lutheran Church in El Paso, Texas. (Texas? Whoda thunkit?) They have an active membership of 60 people, and they average about 30 people in worship. I would be what's known as a bi-vocational pastor--that is, I would be a pastor, but I'd have to find another job to supplement what the church would be able to provide for me.

One of my pastor colleagues said, "BTW, the Lord says, 'take it.'" I know what he means. I just wish it was that simple. I know I've said repeatedly that I want a Call, and here one is, handed to me. I have no problem with the idea of being a worker-priest. Part of me figured that would be the only way I'd get back into parish ministry. I have no reason not to give this Call the serious consideration it deserves, and I will certainly do so. This will probably take a little longer than the usual three to four weeks for me to decide, however. A lot of my decision will be based on whether or not I can find work that will allow me to support my family while being flexible enough to allow me to do what I need to do as a parish pastor. After all, the congregation wants their pastor to help them to grow to the point where they can support the pastor, and that's going to take a lot of work and a lot of time. The church doesn't have a parsonage, so I'd have to buy a house. But they can't afford any kind of housing allowance. The congregation also can't afford any kind of health insurance. There are a lot of questions about how this would work, and I'll be asking those questions over the next few weeks. It's not a cut-and-dried yes-or-no situation.

I ask that you keep me in your prayers as I deliberate--me, my family, and Grace Lutheran Church in El Paso. God help me.


By the way, Faith and I have been married for four years today! Can you believe she's put up with me for that long? Thanks be to God for bringing this wonderful woman into my life.

A Commodore Christmas to You and Yours!

Enjoy these classic carols via a classic computer. This is especially for Pastor Klages!

A blessed and Happy Christmas! May Immanuel--God become flesh to dwell among us--bless you now and throughout the coming new year.

The Terrible Toddler Twins at Three

These were taken at the party to celebrate their third birthday. Enjoy! 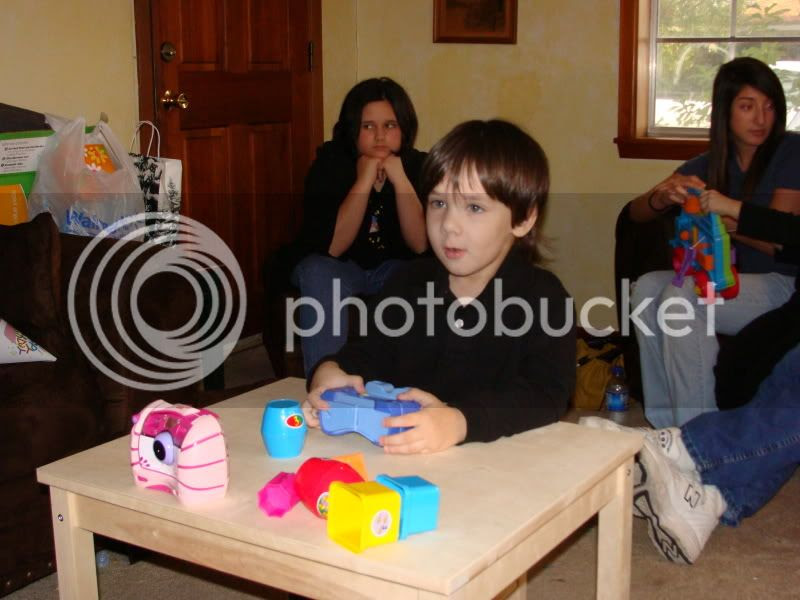 This is Michael holding his new camera. 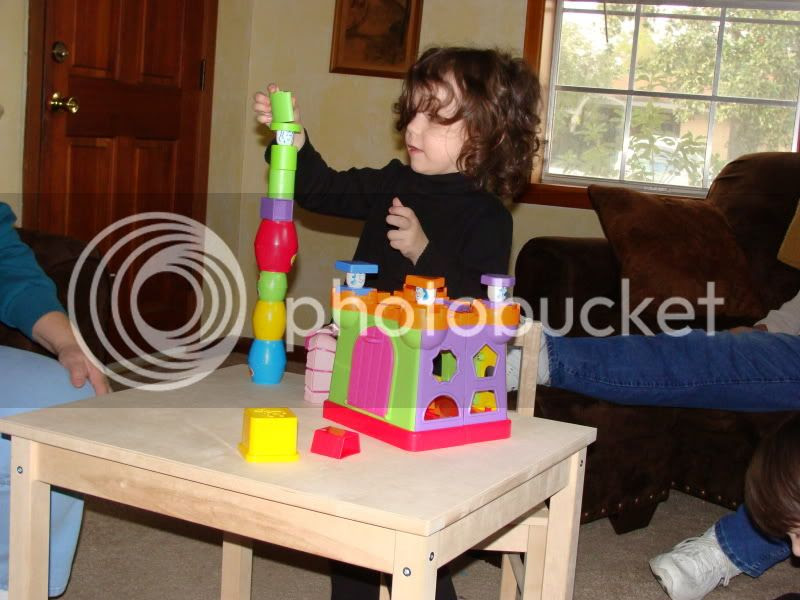 This is Molly stacking blocks.

And now for something completely different.

I usually don't post things like this, but every so often it's nice to have a change of pace. I borrowed this from The Rebellious Pastor's Wife:

1. Started your own blog
2. Slept under the stars
3. Played in a band
4. Visited Hawaii
5. Watched a meteor shower
6. Given more than you can afford to charity
7. Been to Disneyland
8. Climbed a mountain
9. Held a praying mantis
10. Sang a solo
11. Bungee jumped
12. Visited Paris
13. Watched a lightning storm at sea
14. Taught yourself an art from scratch
15. Adopted a child
16. Had food poisoning (in Germany, no less!)
17. Walked to the top of the Statue of Liberty
18. Grown your own vegetables (Does this include mushrooms?)
19. Seen the Mona Lisa in France
20. Slept on an overnight train (No, but I've slept on a regular train)
21. Had a pillow fight
22. Hitch hiked
23. Taken a sick day when you’re not ill
24. Built a snow fort
25. Held a lamb
26. Gone skinny dipping
27. Run a Marathon
28. Ridden in a gondola in Venice
29. Seen a total eclipse
30. Watched a sunrise or sunset
31. Hit a home run
32. Been on a cruise (not unless you count day cruises)
33. Seen Niagara Falls in person
34. Visited the birthplace of your ancestors
35. Seen an Amish community
36. Taught yourself a new language (I can't even learn them when someone else is teaching them!)
37. Had enough money to be truly satisfied
38. Seen the Leaning Tower of Pisa in person
39. Gone rock climbing (not on a grand scale)
40. Seen Michelangelo’s David
41. Sung karaoke
42. Seen Old Faithful geyser erupt
43. Bought a stranger a meal at a restaurant
44. Visited Africa
45. Walked on a beach by moonlight
46. Been transported in an ambulance
47. Had your portrait painted
48. Gone deep sea fishing
49. Seen the Sistine Chapel in person
50. Been to the top of the Eiffel Tower in Paris
51. Gone scuba diving or snorkeling
52. Kissed in the rain
53. Played in the mud
54. Gone to a drive-in theater
55. Been in a movie
56. Visited the Great Wall of China
57. Started a business
58. Taken a martial arts class
59. Visited Russia
60. Served at a soup kitchen
61. Sold Girl Scout Cookies
62. Gone whale watching
63. Got flowers for no reason
64. Donated blood, platelets or plasma
65. Gone sky diving
66. Visited a Nazi Concentration Camp
67. Bounced a check
68. Flown in a helicopter
69. Saved a favorite childhood toy
70. Visited the Lincoln Memorial
71. Eaten Caviar
72. Pieced a quilt
73. Stood in Times Square
74. Toured the Everglades
75. Been fired from a job
76. Seen the Changing of the Guards in London
77. Broken a bone (Not unless this includes breaking someone else's finger)
78. Been on a speeding motorcycle
79. Seen the Grand Canyon in person
80. Published a book
81. Visited the Vatican
82. Bought a brand new car
83. Walked in Jerusalem
84. Had your picture in the newspaper
85. Read the entire Bible
86. Visited the White House
87. Killed and prepared an animal for eating
88. Had chickenpox
89. Saved someone’s life
90. Sat on a jury
91. Met someone famous
92. Joined a book club
93. Lost a loved one
94. Had a baby (I assume this includes being the father of one.)
95. Seen the Alamo in person
96. Swam in the Great Salt Lake
97. Been involved in a law suit
98. Owned a cell phone
99. Been stung by a bee
100. Read an entire book in one day (or two or three)

Inviting Johnny B. to Christmas

I'm working on my sermon for Sunday based on John 1:6-8, 19-28. (Please note that there are two links there if you intend to read the whole text.)

As I read this, I can't help but find myself a little envious of the Baptizer. If ever there was a man who knew his place in the Kingdom of God, it was John. Scripture had told him what he was to be; and even before he was born, he was doing what he was supposed to be doing: pointing to Christ and saying, "There He is! He's the one!" His entire life was spent in preparation for the culmination of his role as the final prophet of the Old Testament Church. When people came to find out what this John guy was all about, all he said was, "I am not the Christ." When he was forced to expand on that answer, even that answer pointed away from himself to the Word of God and to the Christ whose way John had come to prepare. His final word on the matter was, "He must increase, but I must decrease." I can't imagine any this was easy, even with his role clearly laid out for him; but I do envy him that foreknowledge, especially as I struggle with my current vocational black hole.

Christ said, "Assuredly, I say to you, among those born of women there has not risen one greater than John the Baptist." Truly, only a great man could look at himself and say with no deceit and no vanity, "I must decrease." In this Christmas season, when so many things would have us puff up our own importance, may we all be able to say with John, "[Christ] must increase; I must decrease."

When hockey and idiocy collide at full speed . . .

Sean Avery is a goon who plays for the Dallas Stars of the National Hockey League. He has moderate talent for hockey, but he has great talent as an agitator. This time, however, he took agitation too far, speaking of Calgary Flames player Dion Phaneuf and Dion's relationship with actress and former Avery girlfriend Elisha Cuthbert, calling her his sloppy seconds. The NHL has suspended him indefinitely, pending a meeting between Avery and NHL Commissioner Gary Bettman.

Now, I'm not a huge fan of Bettman. I blame him for the near-death of hockey through the lockout of 2004-2005. I blame him for hockey's plunging popularity. But I cannot blame him for suspending Avery. In fact, I think this is one of the few good decisions he has made in his tenure as Commissioner.

The Dallas Stars said that if the NHL hadn't suspended him, they would have. I'm also no fan of the Dallas Stars, and I haven't been for nearly a decade when Brett Hull "scored" with his foot in the crease and the NHL did not overturn the call, giving the Stars the Stanley Cup and denying the Sabres their rightful chance to win it. But I applaud the organization, players and management, for their stand.

An ESPN.com reader responding to this article said, "Guys like Avery could save the NHL. The league has no personality. I love hockey and am a diehard Blues fan, but the league needs a little controversy to draw some attention. Avery is a punk, but he's an interesting punk..." If garbage like that is what it takes to make hockey popular again, I say, let it die. I'd rather have no hockey than that kind of hockey.