On the Radio (whoa) 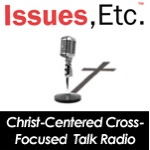 On Monday afternoon, Jeff Schwarz, the producer from Issues, Etc., sent me an e-mail to ask if I'd be interested in appearing on the show. This is not the first time he's asked, and I've been on the show before. But last time I was part of a roundtable discussion on the Fifth Commandment (right click to save and listen). This time I'd be on my own, and I'd be discussing a topic about which I'd written an article for Higher Things Magazine but am no expert: Christian stewardship concerning the environment. Neither factor was particularly encouraging, but Jeff is quite persistent. So I agreed.
Though I was quite nervous--I started shaking a half-hour before and didn't stop until about an hour after--I enjoyed myself. Pastor Todd Wilken, the host, is experienced in leading his guests fairly gently, and Jeff edits segments after the fact so that guests like me son't sound too much like an idiot. I had a bunch of resources in front of me--printed passages from the Bible and Catechism, a copy of my article, and a few other useful notes and facts--so I could fall back on notes if my mind blanked. All in all, it's one of the few things I've done outside of my comfort zone that I've really enjoyed.
If you'd like to listen, right-click this link to save the audio to your computer: http://www.podtrac.com/pts/redirect.mp3/issuesetc.org/podcast/931012312H1S1.mp3

My apologies for the lousy audio. This time it's because my voice was nearly gone!

Audio (sorry about the distortion):

Now available in print (aka BUY MY BOOK!!!)

I participated in National Novel Writing Month for the first time in 2007. I'd always wanted to write a novel, and I'd even made a few abortive attempts in my younger days. But if I was going to actually complete a novel, I knew I couldn't just sit down and write one. So I went into NaNoWriMo with a plan. I'd spent my free time the previous three months writing character profiles, making detailed setting descriptions and sketches, and formulating chapter lists and chapter outlines. Even with all that planning, it still surprised me when, at the end of November, I emerged with over 50,000 words and an almost-complete first draft of a novel.
I spent a lot of time over the next four years looking at a pile of papers. I would take a pen to it every so often to proofread and edit, but for long stretches it just sat there. I didn't really foresee a market for it, as the novel itself is very Lutheran, and the Lutheran publishing house associated with my church body doesn't really publish much in the way of fiction; and with all the Lutheran apologetics that made its way into the novel, I just didn't see anyone else wanting to publish it. I did some vague explorations into the realm of self-publishing, but I decided at first that I didn't want to go that route. I was worried about formatting the pages. I was worried about assembling the files. I was worried about a cover picture. And, to be honest, I was worried that it just plain sucked.
But when I once again successfully navigated NaNoWriMo this past November and wrote book two, a sequel to the 2007 novel, I decided it was time to give self-publishing another look. I took some preliminary steps, asked some proofreader friends to take a look at what I had, and gave the novel another long, hard look.
Today, for the first time, my novel is in print! Love Divine, book one in the "Thy Strong Word" trilogy, has been called a "reluctant love story". It is the tale of a single Lutheran pastor and a young widow who meet when neither of them is expecting a relationship. He's content with his life as it is; she has finally found peace nearly three years after the death of her husband. How will their lives and vocations be affected when God brings them together? How will Justin's congregation react to their pastor's new social life? How will Beth overcome the guilt she feels in moving on with her life?
If you would like to learn the answers to these questions, consider purchasing a copy by clicking on this link. I hope you enjoy reading it as much as I enjoyed writing it.

Sermon for 1/1/12--The Name and Circumcision of Jesus


And here's the text:


Shedding Blood
Luke 2:21
Grace to you and peace from God our Father, and from our Lord and Savior Jesus Christ. Amen.

Circumcision might seem like an unusual topic to discuss on this first day of a new calendar year. Imagine old Abraham who was ninety-nine years old when God commanded that he be circumcised. Had Abraham not believed God, he would have laughed to think that circumcision could possibly have any spiritual meaning or consequence. But circumcision was an Old Testament sacrament in much the same way we understand the Sacraments today when we speak of them as means of grace, the means by which God’s gifts of salvation are applied to us. It was a mark of God’s favor, a visible Word, a saving work of God. It was also a mark of ownership, saying that you belonged to the Lord, that you and your household were heirs of God’s gracious promise. With all of Israel, you could say with certainty, “The Lord is our God, and we are His people.” You could eat the of the Passover feast. You could pray in the temple. You belonged. In circumcision, God named you and claimed you and your household as His own.

And so, circumcision taught a number of things about God’s salvation. That it took place on the eighth day after a child’s natural birth meant that its blessings reached beyond the seven days of the old creation into the first day of the new. It was a new birth—a heavenly birth into a new creation. The same is true of Baptism. The apostle Paul wrote: “If anyone is in Christ, he is a new creation.” To be in Christ as a baptized believer is to live in the eighth day, the first day of the new creation.

Circumcision also taught the truth of original sin. It taught that sin was handed down in an inherited way through the procreation of children. Therefore, sin is like a genetic disease, passed on certainly and infallibly from one generation to the next, from the father to the children.

Circumcision also taught that covenant with God involved the putting away of our sinful flesh and its desires. It meant a decisive break with sin, a killing of sin in the flesh. Circumcision taught that covenant with God involved suffering and pain, and the shedding of blood. On this eighth day of our Lord’s human life we cannot really sing that verse of the Christmas carol, “But little Lord Jesus, no crying He makes;” not on this day, at least, the day of His circumcision and naming.

This doesn’t have the ring of the sentimental. The idea of the Lord and King of the universe lowering Himself to this level, submitting to circumcision in His own sinless flesh, can make us uncomfortable. Babies and mangers, shepherds and angels—all of those fixtures of the Christmas season are appealing to us. But circumcision? It would be better not to talk about that! And yet, this is at the very heart of the work of Jesus: to fulfill God’s Law perfectly as our Substitute, to suffer and to shed His blood and die as the perfect Sacrifice. He is God’s substitute Sacrifice for sinners. Not only did the Son of God willingly give up His divine honor and glory for a time, to take on the lowly form of a servant, but He humbled Himself to the very depths of human existence by becoming obedient under His own Law, even suffering and dying under that Law.

The sinless Son of God was treated as a sinner. In the flesh of Jesus the world was circumcised. As Paul wrote: “In the fullness of time, God sent forth His Son, born of a woman, born under the Law, to redeem those who were under the Law, so that we might receive the adoption of sons.” This is the first blood Jesus shed for our salvation.

This little Child endured all this for you. When He was only eight days old, the Son of God permitted Himself to be wounded, and His blood to be shed, that you would be saved from death and hell. He did not have to do any of this. He had no need of circumcision for Himself; He did not need to become obedient to the Law for His own sake. But He has done all of this for you, so that you would belong to Him.

Circumcision pointed forward to Holy Baptism; and you who bear the greater sign of Baptism on your foreheads and on your hearts have your Christmas joy made new on this eighth day of Christmas, the day of our Lord’s name and circumcision. The Law stands fulfilled in Jesus, down to the least stroke of the pen. All of it, He has kept for you. His circumcision, His perfect obedience, His suffering and death, are yours; and through Holy Baptism, you are His.

The remembrance of the circumcision of Jesus is not a sentimental celebration. There is no glorious angel, no humble shepherds, no stylized manger scene. There is only blood—the blood of Jesus shed for you, shed to perfectly fulfill the law, shed for you and for your salvation. By the grace of God, you drink the blood and eat the body of the One who was pierced on your behalf, a feast in which you receive all that Jesus was born, lived, died, and rose to bring you: the forgiveness of sins, salvation, and eternal life. In the name of the Father and of the (+) Son and of the Holy Spirit. Amen.