On the reading of books 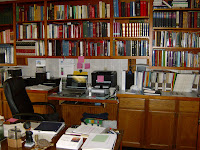 I recently read an excellent blog post by Pastor Peters on his blog "Pastoral Meanderings".  He writes as many thoughtful things in a day as I write in about a month . . . if I'm lucky.  Anyway, this blog post was about the necessity that pastors be readers of books.  It's an excellent post in an excellent blog, and I recommend both to your reading.

I have a pastor friend here in Illinois who gently mocks me because I have so many books.  I put up with it--in part because I know he reads at least as much as I do, though he now keeps his books in his Kindle since his collection was destroyed during Hurricane Katrina; and also because, despite his mockery, he helped me move 45 boxes of books into my study at church and another 45 boxes of books into Faith's study at the house.  He jokingly says, "People don't care how much you know until they know how much you care."  He says it jokingly, but it has a serious undertone to it because there are people out there who take it very seriously.

I read quite a bit, and I do so unashamedly.  It's one of the more important things I do, whether it's for recreation--and I do quite a bit of recreational reading, I admit--or for the purpose of writing a sermon or a Bible study, or for my continued theological education, or for my spiritual edification.  It is important that the members of my congregation know how much I care about them, how I love them with Christ's love.  But part of caring for them, part of loving them with Christ's love, is that I actually have some idea what I'm talking about.  If someone comes to me with a problem, it's all very well and good to tell them that Christ loves them and so do I.  It's important that I do so.  But I also want to bring the Word of God to bear on the situation, and it's important that it be the correct Word.

There's an old joke about a man who is trying to discern the will of God, but he can't figure out what to do.  So he pulls out his Bible, closes his eyes, opens the Bible to a random page, and puts his finger down on the page.  He opens his eyes and reads, "And Judas went and hanged himself."  Stunned he says, "That can't be right."  So he repeats the process, opens his eyes and reads, "Now go and do likewise."

If I don't study the Word, if I don't continue to learn as a pastor how to properly distinguish Law and Gospel, if I don't continue to grow theologically, I might as well just close my eyes, open my Bible to a random page, and put my finger down on a random verse.  The congregation in which God has placed me to serve deserves my best service; and that means I'm going to keep reading.


(By the way, the picture attached to this post is from my study.  It's not all my books, but it's a good portion of them.  I just hope the shelves don't fall on me.  It happened to me once in North Dakota.  My skull was fine, but the shell of my laptop computer was cracked.  And the clean-up?  *shudder*)

What God ordains is always good: this truth remains unshaken.
Though sorrow, need, or death be mine, I shall not be forsaken.
I fear no harm, for with His arm He shall embrace and shield me;
So to my God I yield me.

No matter what your hardship is, no matter how heavy, no matter how long it lasts, the will of God is always good; for in everything God works for good for those who love him. In the meantime, don’t stop praying for miracles, for God in His mercy hears your prayers, and in His great love He answers them in the way that is best for you. In the name of the Father and of the Son (+) and of the Holy Spirit. Amen.
The peace of God which passes all understanding will keep your hearts and minds in Christ Jesus always. Amen.

Fulfilling All Righteousness
Matthew 3:13-17
Grace to you and peace from God our Father, and from our Lord and Savior Jesus Christ. Amen.