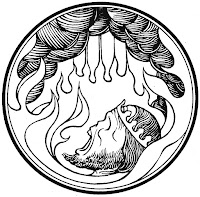 At first glance, the account of the beggar Lazarus and the unnamed rich man might seem to be right out of modern reporting: a tale of equality or vindication. Some might say that the moral of the story is, “All things will come out even in the end.” Others might say that the story means that the rich will become poor and the poor will become rich. But neither is true; it doesn’t always happen that way. Nor does suffering earn favor with God. The difference between Lazarus and the rich man is not found in their wallets, nor in their deeds, but in their hearts. For while it seems as though hungry Lazarus has nothing besides the mercy of canines, in truth, he has riches the world can scarcely imagine. He has Moses and the prophets; he has the Word of God.
The rich man rejected Moses and the prophets. Even in the fires of hell, hearing the truth from no less of an authority than Abraham himself, the rich man refuses to believe that Moses and the prophets can save his brothers. The hard-heartedness of the faithless goats perseveres into eternity. They want to be judged by their works. They want a god of their own design, a god or goddess who looks like them. And in the end, they get what they want. At their own urging, our Lord calmly hands the Pharisees and priests over to their self-chosen fate with one of the saddest sentences in all of the Scriptures: “They have their reward.”
Longing for crumbs from the table while dogs licked his wounds, miserable Lazarus found no mercy from the rich man, no crumb to abate his hunger, no balm for his wounds, no camaraderie to soothe his lonely exile. The kingdom of men rejected him. But in the end, Lazarus found what he sought. He found mercy that endures forever. He found Living Water and Bread from Heaven. He found eternal satisfaction and health. He found it in Moses and the prophets. In the Word of God he found a Man in worse shape than himself; a Man condemned for sins He did not commit; a man in whom there was no beauty, no comeliness, not even any dogs to lick his wounds. That Man bore the iniquity of all the evil which fallen men have done, so that fallen men like Lazarus and the rich man and all who ever lived might go free.
In His mercy, God lowered Lazarus to the point where he was not too proud to beg, for, as Mary foretold, “He has scattered the proud in the imagination of their hearts. He has put down the mighty from their thrones and has exalted the lowly. He has filled the hungry with good things, and the rich he has sent away empty.” God gives to His children a harvest where they did not sow, wine where they did not tend, grace they have not earned. The God of Abraham, the Baby of Mary, the Messiah prophesied by Moses; God in flesh in the person of Jesus has come to Lazarus. And now Lazarus, for all his trouble in this sad life, knows perfect joy and peace, for the holy angels have borne him to the bosom of Abraham.
Thanks be to God for His abundant grace and wisdom. He has made us like that holy beggar: helpless, weak, and dependent, trusting in no one but Him, satisfied with no other food, drinking no other wine. He has soothed our wounds with the balm of baptismal waters. He has fed us undeserved crumbs from His table, humble gifts of bread and wine in which our Lord hides His glorious body and blood. He has given us Moses and the prophets in His holy Word, which is our great comfort and joy as we sprawl here in the world, awaiting the eternal joy of the Lord, because for us—for dogs and children, drunks and outcasts, beggars and sinners all—for us is the Kingdom of God. In the name of the Father and of the Son (+) and of the Holy Spirit. Amen.