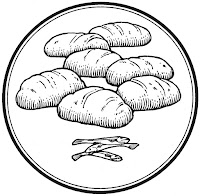 I've been stuck with my wheels spinning for about six months, trying to come up with a text for the Seventh Sunday After Trinity. It was hard enough to write a text for the feeding of the 5,000, but then to write one for the feeding of the 4,000? I looked through my notes over and over again, and then, finally, the connection came to me: the bounty of Eden restored in the bounty given to the 4,000 and in the Lord's Supper. I don't think this is my strongest text, but getting this out will allow me to move on to something else. (Being stubborn is oh so much fun.) There's a couple word/rhyme repeats in there that I'll fix eventually. Feedback is appreciated.

1. Oh, the joy of Eden's bounty:
Food in plenty, free from toil,
Free to walk with God forever.
Only sin this bliss could spoil.

2. Adam ate the fruit forbidden,
Ate against the Lord's command.
He was exiled from the Garden.
Eden's bounty now was banned.

3. Then came Christ to feed the hungry.
Bread of Life to feed the soul,
Bread and fish to feed the body:
Flesh and spirit, fed the whole.

4. First He satisfied the spirit,
Serving them His holy Word,
Preaching both the Law and Gospel,
Filling them with what they heard.

5. Then He blessed the bread and broke it.
Daily bread from Christ the Lord,
Food without the toil or labor:
Eden's bliss for once restored.

6. Bread is blessing, but remember:
Man can't only live by bread.
Man is satisfied receiving
Ev'ry Word which God has said.

7. Eden's bliss and Eden's bounty,
Peace with God again restored,
To the saints of God is given
At the Table of the Lord.