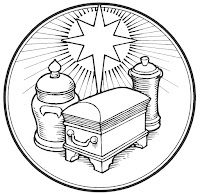 RIGHT-CLICK HERE to save the audio file. I didn’t feel like I was rushing as I preached it, but at the end of the preaching, it felt rushed.

Revealed
Matthew 2:1-12
Grace to you and peace from God our Father, and from our Lord and Savior Jesus Christ.  Amen.

When Jesus was born, He was first made known to the believing, and hid Himself from the unbelieving, even the king and people of Jerusalem. But today, “the heavens declare the glory of God and the firmament reveals His handiwork.” The preaching of His epiphany, His arrival in our human flesh, has gone out into all lands. It began with the angels singing, “Gloria in excelsis Deo.” “Glory be to God on high!” Then came the shepherds, those first preachers of Our Lord’s nativity. And today we hear that the guiding star leads the Magi to become joyful heralds to those who live in the farthest reaches of the earth.
Yet the splendor of this star and the glory of this day seem sullied when we recall the cruel schemes of wicked King Herod. This earthly king is so in love with his corrupting and corruptible throne, so delighted with his depraved palace, that he is afraid of a tiny infant. And so, when the Magi ask, “Where is He who has been born King of the Jews?” this question terrifies Herod into brutality, and all Jerusalem with him.
But do not let this violence dampen your celebration. For as the Spirit of God proclaims through a star, as He preaches through simple shepherds and clever Magi, so He also uses the fury of Herod to fulfill prophecy and to further God’s mercy. You know what happens when the Wise Men heed the divine warning and so return to their own country another way. Then the ever-righteous, ever-protective Joseph “takes the young Child and His mother by night and departs for Egypt.” There, in the land that once housed another barbaric ruler who sought to kill the infant Moses—there the Son of God will remain. With His presence, He will bless the Gentile nation that once welcomed another Joseph. And in this way, the glory of the Lord will again be revealed; the mercy of God will again be openly made known to all men—including us.
Herod, that enraged tyrant, does not perceive any of this. Neither do the chief priests or scribes, who turn blind eyes to the horrid crime of slaying innocent boys in hopes of killing the Christ—even as our own leaders turn blind eyes and even encourage the murder of the pre-born today. But make no mistake: the priests and scribes all know the Child at Bethlehem is the promised Messiah; they said so themselves. But thanks to the Holy Spirit, we perceive how this slaughter of the innocent martyrs serves as yet another sermon proclaiming the epiphany of our God. This cruel act announces that the true Messiah is here, and it reminds us how He saved us. For that is how our salvation is accomplished: the Innocent Christ is slaughtered. That is how the mercy of God comes to full fruition. And most significantly, that is how we live—by eating and drinking this innocent flesh and blood sacrificed on the cross. So while we loathe King Herod, we give thanks to the Lord whose thoughts exceed our imaginations, and whose wisdom is wiser than any Magi. He uses the cruelty of Herod to further the Gospel of our salvation.
What an epiphany we celebrate! Our joy is heightened not just by the fact that Jesus appears for all men, but also by the undeniable truth that His appearance means that the tyranny of sin is overthrown, the cruelty of man will not remain, the deceptions of the devil are turned to our good, and the reign of terror has ended. Let us give thanks by receiving into our mouths and hearts the flesh and blood of this Child whom angels praised, whom shepherds preached, whom Wise Men worshipped, whom Egyptians welcomed, and whom even Herod—in God’s mysterious way—revealed to be our King. In the name of the Father and of the Son (+) and of the Holy Spirit. Amen.