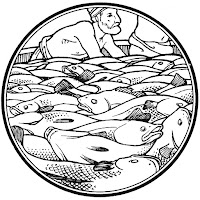 It is the fisherman’s dream: a boat overflowing with fish. But when it happens to Peter the fisherman, he is filled with fear. It’s so unlikely, so…supernatural. Casting nets down at that time of day was like fishing with an empty hook. But at our Lord’s Word, the nets went down. At His Word, the nets came up full. But more than just the miracle of it, there was also the fact that this blessing seems as though it will drown them. The boats are sinking. It is too much of a good thing. Peter is afraid, but not of the fish or the water that might drown him. He is terrified of God in the Flesh, ordering blessings into nets and boats and hearts that cannot contain His gifts.
To the Creator—the awesome, fear-inducing God that rules all things and terrifies Peter—there can only be one response. He is not the familiar friend: “Hey, God. It’s me again. Are you listening?” He is not the gracious employer: “Excuse me, God? I’d like to tell you a few things, make a few suggestions.” The only possible response to the real God is the desire to be away from the holiness that will utterly destroy you. “Depart from me, for I am a sinful man.” That is the right understanding of the fear of the Lord. It really is the beginning of all wisdom, for it is the confession that God is God and you are not, and that you have nothing to offer Him. Your heart is sunk.
But that which God sinks, He will raise. The Law cuts us down in service to the Gospel, which lifts us up. We are drowned and buried so that He would resurrect and revive us. We are made dead to sin. Our ambitions and desires disappear in the face of His holiness, His perfect Law. We are emptied and focused, and so we cry: “Depart from me, for I am a sinful man.” To this heartfelt cry, this repentance worked by the Spirit, God responds neither with destruction nor with merciful departure. Instead He says, “Fear not!”
In the end, it is not the gifts of creation that He most desires to give, but His grace. The gifts of creation can be abused. There is such a thing as too much alcohol, too much screen time, too much food. But there is no such thing as too much grace, too much Bible, too much prayer, too much of the Lord’s Supper. There can never be too much mercy and forgiveness. God loves to be gracious to you. He forgives. He restores. He says, “Fear not.” He will neither starve you nor drown you, nor will any evil overtake you. He is with you. This gracious, loving, faithful God, Father, Son, and Holy Spirit, is made known to you in His Word.
It is the creative Word of God that saves us. He who called light to be light from nothing, who ordered fish to the nets, who calmed the storm, who healed the sick, who stilled the waves: He calls us to be Christians, sons and daughters of the King, by His Word. His Word has power; His Word does what He says it will do. It is the washing with water through the Word in Holy Baptism that makes us our Father’s own dear children. It is the Word and the promise, given to the Church on the night when our Lord was betrayed, that makes bread and wine into His body and blood. We feast upon the Word that became flesh, and by that Word we are united to Him and declared righteous.
“Fear not.” This is the sum of all His teaching, all His living, suffering, and dying. He lived, died, and lives again to raise up again by the power of Baptism, to deliver us from all fear, so that we would live with Him forever. He is our God, our Lord, our Savior, our Friend. In Him and His holy cross, you are safe. In the name of the Father and of the Son (+) and of the Holy Spirit. Amen.
The peace of God which passes all understanding will keep your hearts and minds in Christ Jesus always. Amen.