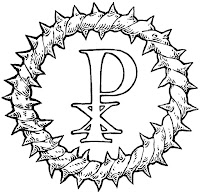 
Christianity in an UnChristian World: Suffering
I Peter 4

The first three chapters of Peter’s first letter were important: to know that we are as baptized Christians, being built as living stones into the living temple of the Church; to know that we live in love in every circumstance of life. But Peter’s words to us tonight show us what all this leads up to: suffering. This is the life of the Christian when the rubber meets the road and leaves a skid mark on us.
Sadly, suffering is often what causes some to veer off the road of Christianity. In fact, often it causes some to veer off the road of life altogether. It is why assisted suicide, sinfully called “mercy killing,” continues to grow in popularity and public acceptance. We don’t want to suffer. For Christians and non-Christians alike, the ideal life would be a smooth, straight road—all downhill, and always with the wind at your back. And many are looking for God—or false gods—to give them just that.
But man’s ideal is not man’s reality. It was in the beginning, but sin changed that. Adam’s work became toil; Eve’s childbearing became painful; brother turned against brother. Though many things have changed across the centuries, the reality of suffering has not. Suffering became the new normal, quite contrary to what the serpent had promised.
When the Son of God came into our world in the flesh, the ideal became reality again. A perfect man, unstained by sin, once again walked this earth. Through His suffering, death, and resurrection, He paved the way to eternal life—though the way will still not be smooth or straight. No, it will still be hard, and it will still involve suffering. You will have to wrestle with your sinful flesh and its passions, all of which oppose the way of Christ. You will have to endure the temptations and the attacks of the sinful world; it will hate you. You will be under siege from Satan, who wants to wear you down and wear you out so that you give in. You will even have crosses sent from your Father in heaven for your good, though you will be tempted to call them evil or to believe they were sent by Him out of anger. Suffering is the norm for the Church. This is why Peter says: “Beloved, do not be surprised at the fiery trial when it comes upon you to test you, as though something strange were happening to you.”
Peter began this chapter by saying, “Since therefore Christ suffered in the flesh, arm yourselves with the same way of thinking.” “Arm yourselves.” Be ready. Soldiers arm themselves when expecting attack. So you, too, expect to be attacked, and you must be ready for it. “Arm yourselves” with the mind of Christ, who came to help the helpless, to love the loveless, to serve the lowly and outcast, to forgive the sinner, to suffer for the suffering, to die for the dying. The mind of Christ is not selfish; it is selfless. The mind of Christ seeks to cover your sins, not to hold them against you. He covers them, washing them away with His blood. That is the mind of Christ, given to you in baptism. But if you think that way—if you live that way—you, like Christ, will suffer for it.
When that suffering comes, that is a blessing. Peter says, “Rejoice! Rejoice insofar as you share Christ’s sufferings, that you may also rejoice and be glad when His glory is revealed.” This doesn’t mean that your sufferings atone for your sins, as Christ’s do. That could never be, nor does it need to be, for your Lord Jesus has done it all. He atoned for all the sin of the world, yours included. “It is finished,” He said on the cross, and it was finished. There is nothing left to be done. But when you suffer for the truth; when you suffer for doing good; when you suffer because you are a baptized child of God; you are being treated just as Jesus was. In that way, you share in His suffering. And when that happens, you are blessed, “because the Spirit of glory and of God rests upon you.” The Holy Spirit, who is making you holy now, will glorify you in the end.
“The end of all things is at hand,” Peter writes. And the closer the end gets, the more Satan will rage. Even so, do not be afraid—not of Satan, not of the world, not even of the end. Instead, go on serving one another to the glory of God, for Satan cannot harm those who are in Christ. If the end is at hand, your salvation also is at hand: the end of your suffering and the beginning of your new life.
For now, as Christians living in an unchristian world, “let those who suffer according to God’s will entrust their souls to a faithful Creator while doing good.” Trust the Word of God. Trust His faithfulness. He who gave you life will give you new and eternal life when He raises you up on the last day. Until then, it won’t be easy. The dangers of false belief and false gods abound. The attacks and the suffering will surely continue. But you can be sure of this as well: in Christ you are safe. In the name of the Father and of the Son (+) and of the Holy Spirit. Amen.