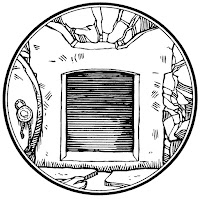 Alleluia! Christ is risen! He is risen indeed! Alleluia!

Christ is indeed risen from the dead, trampling down death by death. The resurrection of our Lord Jesus is the glorious triumph of God over Satan. It is the resounding victory of the Lord of Life over the prince of darkness, for the resurrection of our Lord Jesus is the raising up not just of His flesh, but of ours as well.
Yet is this what the women believed on their way to the tomb? Mary Magdalene, Mary the mother of James, and Salome bought spices, that they might come and anoint the body of Jesus. But the question uppermost in their mind was not the victory of their Messiah and Lord, nor how His resurrection impacted their life. They were not thinking about how the Christ who had raised Lazarus, the little girl, and the young man from Nain would now raise Himself. They were not imagining how the Lord who saved others had now saved them. Instead, they said among themselves, “Who will roll away the stone from the door of the tomb for us?”
Surely the women do not believe that the Lord is in the tomb. Could the One who provided the breath of all that moves possibly have been held breathless forever? Do they really believe that He will lie forever in a grave? Perhaps the women are not deceived. Perhaps their question about the stone is not one of doubt or fear. Perhaps they wonder about the stone in the same way that Isaac wondered about the lamb for a burnt offering. Perhaps, like Isaac, they trusted their Father and simply were wondering how it would happen. In either case, they hasten to the tomb to anoint with spices the life-bearing yet buried body of the Life of the world who now hides in death.
Perhaps, sitting in our homes right now, it seems the Lord of Life is powerless. Perhaps it seems like the grave is winning. Certainly many are cowering, hopeless, wondering if this virus is ever going to end, if we will ever be able to resume what had been our daily lives. This Easter doesn’t seem very happy, does it?
In answer to that despair Jesus says, “Blessed are those who mourn, for they shall be comforted.” These women at the tomb would understand these words in their fullness, for they would be comforted with a never-ending comfort. When they stopped looking down and instead looked up, they were alarmed, for they saw that the stone had been rolled away; they saw a young man clothed in a long white robe sitting on the right side. But he said to them, “Do not be alarmed. You seek Jesus of Nazareth, who was crucified. He is risen! He is not here. See the place where they laid Him.”
The Lord will not abandon His own. He had been moved with compassion for the crowds, who were like sheep not having a shepherd, merely because they had continued with Him three days. Would He now leave them to fend for themselves? Would He give them nothing but the fruit of disappointment? Of course not; the Lord never forsakes those who cry out to Him. When they cry, He hears. When they seek, He allows Himself to be found. Maybe you expect Him in the grave, the place you last saw Him. But He is not there. He is exactly where He said He would be: present where two or three are gathered in His name; present in His word of Absolution; truly, bodily present in bread and wine to be your Food and Drink.
As we shelter in our homes this Easter day, let us imitate these women. But do not imitate their questions or their fear. Instead, let us imitate their faith in the message of the angel, leaving the tomb with haste when the angel reminded them what Jesus said. They went out quickly, knowing that, just as Jesus promised, they would be reunited with Him. And we will be reunited again as well: reunited with each other; reunited with the Body of Christ, the Church; reunited with our Lord in His body and blood. We will see our Lord Jesus, just as He promised. Alleluia! Christ is risen! He is risen indeed! Alleluia! In the name of the Father and of the Son (+) and of the Holy Spirit.  Amen.