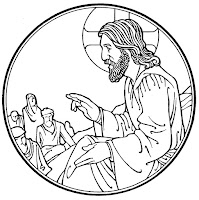 
CLICK HERE to view the video of the sermon.

“Be merciful, just as your Father is merciful.” What does this mean? How merciful is our Father? While we were yet sinners, our Father sent His Son to die on the cross for us. That's how merciful He is. You can’t live up to that. After all, even if you have good intentions of being merciful, the old self is still right there. You remember what your fellow sinners did to you—ever slight, every insult, every injustice. And you want to get them back. You assume the worst about your neighbor because you think you know them and how they operate. You bring up people's old mistakes again and again. You get treated that way, and you do the same thing in return.
Sometimes that desire is even justified. It would have been reasonable for Joseph to have taken action against his brothers for what they did to him. He was the de facto ruler of Egypt. His brothers were guilty of a conspiracy to commit murder, of kidnapping, of wrongfully selling Joseph into slavery. It would not have been wrong for Joseph to do exactly what his brothers were afraid he would do.
And God would be perfectly within His rights to destroy you right now, to condemn you to the same eternal torment reserved for Satan and the other fallen angels. That us what sinners deserve. But that's not what He does. “While we were yet sinners, Christ died for us”—not after we had repented, not after we decided we were going to do things God's way. That is how merciful our Father is.
God does not give you what you deserve, and He wants you to show the same mercy to your neighbor. He would have you overlook and forgive the sins of your neighbor. Yes, you should confront sin when necessary—after all, we don't want people to harm themselves or those around them by whatever it is they're doing wrong—but you must not hold grudges or let old arguments and animosities determine how you think about that person or act toward them. “Be merciful, just as your Father is merciful.”
But the Old Adam is selfish. The Old Adam sees his god every time he looks in the mirror. And that false god, like any false god, doesn't tolerate rivals. When the false god within our own hearts is offended, he demands satisfaction. And there's nothing we can do ourselves to change that. Maybe we can improve our behavior somewhat, but the old grudges, the old hatreds, the old prejudices are still there in our hearts. The false god within us needs to be put to death, and our true God, Jesus Christ, needs to take its place.
And that is exactly what God does to us. He puts us to death. He drowns us in baptismal waters, not just on the day we were baptized, but daily. He puts us to death with Christ on the cross. And that means that He also raises us up with Christ. The Father’s mercy is not just an example for us to try to follow—though we should examine ourselves using His Word as a standard. Our Father's merciful example, and Christ's merciful example towards sinners He encountered in His ministry, is more than an example. It is a pattern, a mold in which God lovingly recreates us.
That incredible standard of mercy and love toward one's neighbor is how God actually sees us in Christ, because that's the standard that Christ lived up to. And that standard is therefore also what we really are according to our new selves. God says we are merciful, because He sees us in Christ, who is merciful. But He doesn't lie. His Word does what it says.
And that means that we who now are merciful will inherit the greatest mercy of all. God provides all our needs, not just for this life, but for eternity. Before we are even aware of a need, He fills it. And that is especially true of our need for His presence and love. We may be capable of having mercy on those who wrong us, but we usually don't like it very much, and we often don't necessarily like to be around that person a whole lot for fear he will do it again. But we who were sinners, for whom Christ died while we were yet sinners, He wants us to be in His presence forever. That's how merciful our God is. In the name of the Father and of the Son (†) and of the Holy Spirit. Amen.