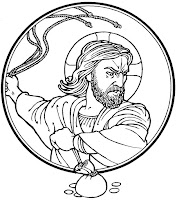 Jesus said, “Days will come upon you when your enemies will build an embankment around you, surround you and close you in on every side, and level you, and your children within you, to the ground; and they will not leave in you one stone upon another, because you did not know the time of your visitation.” It seemed preposterous. Jerusalem was the city of God, the apple of His eye. Jerusalem was the home of the Temple, where God Himself promised to dwell among His people. But everything our Lord foretold happened to Jerusalem. Barely 40 years after this, in the year 70, the Roman overlords laid their siege against Jerusalem and annihilated the holy city. Things she loves so dearly—even her godly worship and her beautiful buildings—were taken from her. This happened because the chosen people of God no longer put their trust in God. This happened because they looked for their peace in their status as children of Abraham. This happened because they looked for their peace in what they believed was their obedience to the Law. This happened because Jerusalem—the priests and Pharisees and Sadducees and Scribes and the people—did not know the time of her visitation by the Lord.
But Jesus will suffer first. He is the Temple not built with hands, the Dwelling-Place of God in flesh among His people. He will die first for Jerusalem. He will be hemmed in, surrounded by the chief priests and teachers of the Law. Soldiers will seize Him. They will level Him. He will die just outside the city, put to death for the crime of coming to save people who believe they have no need to be saved. God in flesh has come to visit His people, and they shout, “Crucify Him! Crucify Him!” They drive nails into His hands and feet. They lift Him above the earth on a cross. They mock Him as He hangs until He dies. Jesus is the Cornerstone, leveled and rejected by His chosen people. If only Jerusalem knew. If only they knew the cause of their peace.
You know, and still you reject Him daily and much. You have been running after false peace and false comfort wherever you can find it. Do you look for your peace in what you possess? Do you look for peace in what gives pleasure to your body? Do you look for your peace in not being as bad or sinful as others? It’s certainly understandable. After all, others are really bad; they will be the ones that go to hell. And you are basically good, right? You sin from time to time, but it's not like you do anything really bad. Is that where you look for your peace?
Jerusalem's false peace failed them, just as your false peace fails you. You cannot find true peace on your own. Only the death and resurrection of Jesus makes the peace of Jerusalem. His death and resurrection makes for your peace, as well. His death gives you peace with God—peace, Jesus tells us, which the world cannot give. That peace which He won for you on the Cross is delivered to you in His gifts: in His Word of Absolution, in His washing of Holy Baptism, in His holy Supper. There in His Word combined with water, with bread and wine—there is the peace of God.
If only Jerusalem had known. And if they had listened, if they had put their trust in what God had told them through the prophets and through Jesus in flesh, they would have known. But now you know, for you have listened. You have received. And you have rejoiced, for He has made his peace known to you, a gift of pure grace. Jesus is your peace. In the name of the Father and of the Son (+) and of the Holy Spirit.  Amen.