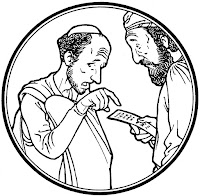 It doesn’t seem right, does it? People who spend their lives trying to do everything the right way receive no credit from the Lord for their efforts. Of course God does not approve of sin, and He doesn’t reward failure to live according to His Law, no matter how hard anyone tries. He is perfectly just, and His Law demands perfect obedience. So how does it make any sort of sense that Jesus commends the manager for his shrewd dishonesty? Does that somehow make Jesus unjust?
In reality, this story is one that Jesus tells describing the saving Gospel coming to lowly debtors. Sinners have gigantic bills. We owe the Lord more than we can ever pay Him. The wages of sin is death, and that is a price beyond our ability to pay. In the language of the parable, we are the ones who have our bills slashed. So—believe it or not—Jesus is the unjust Steward. We call it the parable of the Unjust Steward, but don’t get caught up in that. Perhaps the better title would be “The Merciful Steward.”
The scribes and Pharisees, the religious leaders of the Jews, were accusing Jesus of wastefulness. He wasted His time and energy with public sinners. Jesus would teach and eat with tax collectors, adulterers, others who had bad reputations, and even those who were unclean according to the Temple law. Jesus welcomed them in order to teach God’s Law and Gospel. He was and is the Steward of grace, tearing up their bills and freeing them of their eternal indebtedness.
The Jewish leaders were upset with Jesus, the unjust Steward, because they believe that He is not tending to those who deserve His time and teaching. They consider Jesus to be contaminating Himself by associating with sinners. But that is precisely the point. Jesus lavishly pours out His grace upon people who are looked down upon by those who see themselves as righteous, upon people who confess their sin and recognize their debt. As King David wrote, “I said, ‘I will confess my transgressions to the Lord,’ and You forgave the iniquity of my sin.” He is the only one with the righteousness to pay the astronomical debt of our sin and rebellion against the rich Master, our heavenly Father.
Thanks be to God, for He does not want us rotting in prison. He praises His perfect Steward Son who has taken your bill and actually paid it in full. When Jesus bore the scourge of the whip and the piercing of the nails; when He endured the cruel death on the cross, He was marking your bill. But it was not simply a reduction in what you owe. He eliminated it, erasing the debt with His own blood. Jesus, the great and perfectly unjust Steward, has indeed been faithful in delivering to you wealth that you have not earned. Dr. Luther knew the truth of it when he taught us to confess, “I believe that I cannot by my own reason or strength believe in Jesus Christ my Lord, or come to Him…” In that way we confess that we don’t have to rely on ourselves. We don’t have to earn forgiveness. And we don’t have to die in our sin.
Instead, rely on His good will. Rely on the promise made true by His Son. Rely on His mercy being so abundant as to cancel all your sin and to receive you into His home in Heaven. Rely on the reasoning of St. Paul: “He that spared not his own Son, but delivered him up for us all, how shall he not with him also freely give us all things?” Certainly no one can now lay anything to your charge, you who are God's elect. Nothing shall ever separate you from His love, because the only thing that ever stood between you and Him was your debt, and His Son has shrewdly put all of your debt away. Praise God for the work of this great Steward, His Son, our Lord Jesus Christ! In the name of the Father and of the Son (†) and of the Holy Spirit. Amen.