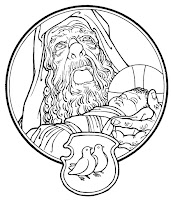 
CLICK HERE to view the sermon video. Sorry for the blurriness. I can’t figure out why it does that.

The Apostle Paul wrote in his letter to the Galatians, “When the fullness of the time had come, God sent forth His Son, born of a woman, born under the law, to redeem those who were under the law, that we might receive the adoption as sons.” It’s all about timing. The timing of the coming of the Son of God is nothing short of a miracle. At just the right time, Christ comes to save the ungodly. So many things in life really come down to timing. If you cook a turkey too long, it will be inedible; if you do not cook it long enough, it will make you sick. If a sprinter takes off before the gun, he is disqualified; if he waits too long, he cannot catch up. It is all about timing. So it is that the time was right for the coming of the Son of God.

What’s important to know about the Temple is that God Himself promised that He would dwell within its Holy of Holies. The Temple was the dwelling place of God among His people. If you asked the Jews in the year 4BC where to find God, they would point to Jerusalem and the Temple. This was the holiest place in all the earth, for there God’s name dwelt, and His glory filled it.

Joseph and Mary brought the baby Jesus to the Temple. While they were there, an old man named Simeon came to meet them. He had waited his whole life for the consolation of Israel, and the Holy Spirit revealed to Him that he would die until he had seen the promised Messiah. And so he waited…and waited…and waited, until the time was right for the coming of God in the flesh. The old man takes Jesus into his arms and sings: “Lord, now You are letting Your servant depart in peace, according to Your word; for my eyes have seen Your salvation which You have prepared before the face of all peoples, a light to bring revelation to the Gentiles, and the glory of Your people Israel.”

In the midst of all that gold and glory, God’s presence was now contained in this little Baby. No longer was the presence of God in the wonder and majesty of a building; it now resided in the little Baby Simeon held in his arms. The Temple built with hands had served its purpose; now God would dwell among His people in Jesus, the Temple not built with hands. This is the miracle of the Incarnation: God takes on human form; the majesty and splendor of the Creator of the universe is hidden in the lowliest of beings.

This is the fullness of time. This is how the almighty God and Creator of the world wants you to see and know Him. He does not want you to fear Him or to wonder in awe at His might. He wants you to make Him a part of your family, a part of your very life. He wants you to call Him Father, because you are His child. He has sent His Son, your Brother, Jesus Christ, to save you from your sins. Do not be afraid. This little child, so humble and ordinary, will bring about the salvation of the whole world.

That is the miracle of the Incarnation. This is the miracle which you hold in your mouth at the Lord’s Supper. Christ our Lord continues to come to you in the ordinary and humble things of the earth. God’s glory, His forgiving presence, is to be found in that little Babe, Jesus Christ. It doesn’t make sense to our eyes. We cannot comprehend how all of God’s might resides in the most helpless of infants, just as we cannot understand how He comes to us in bread and wine. Human flesh; Word; water; bread and wine: these are His vessels. God’s salvation, indeed His very glory, and your consolation, is contained in these humble gifts. Put your trust in His Word. And when your last hour comes, by faith in this little Child in Mary’s arms, you may depart this life in peace. In the name of the Father and of the (+) Son and of the Holy Spirit. Amen.