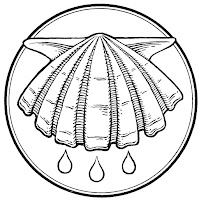 Now that I’ve gone through the Propers for the 1-Year Lectionary, I’ve wrestled with a direction to take with writing hymn texts. It was easier when I had a blueprint: I wanted to write a text for each of these Sundays of the Church year, so I’d write until I was finished. But it’s harder when you’re waiting for inspiration to strike.

Recently I was inspired to work on a text based on an ancient sermon for Matins of Holy Saturday. A friend and fellow hymnologist, the Reverend John Fleischman, had written a text based on the Exsultet text of the Great Vigil of Easter. When he saw my text, he suggested that we team up to write texts for every Scripture reading of the Vigil. What an intimidating project to pursue! Then again, after jumping into turning the Litany into a hymn text as one of my first five texts, apparently my hubris knows no bounds! Well, actually, I was at a loss at first.

However, as it always seems to work out, I received inspiration while attending a pastors’ conference today. Instead of tackling the first text, which is the creation account in Genesis 1-2, I decided instead to look at the crossing of the Red Sea, which is Exodus 14:10-15:1. I wrote an eight verse text in the space of about three hours. Only at conferences do I seem to write so quickly. That doesn’t guarantee a *quality* text, but I’m fairly confident that this will pass my personal muster. As far as the tune goes, that’s still up in the air.

Anyway, here’s the text. Any feedback would be appreciated. Despite my hubris, I’m not so proud as to think my work can’t be improved.

Lift Up Your Eyes, O People

for the Easter Vigil

1. Lift up your eyes, O people.
Your enemies draw near.
Cry out to God for mercy.
Fear not! The Lord is here!
He never will forsake you
To perish in the dust.
He hears your plea and answers,
In Him alone you trust.

2. God’s people fled from Egypt,
From slavery and shame.
But Pharaoh, with his soldiers,
Pursued, his rage aflame.
The people cried to Moses,
“Does Egypt have no graves?
We do not wish to die here;
‘Twas better to be slaves.”

3. But Moses said in answer,
“Fear not! Stand firm, and see,
For God will work salvation:
From bondage you are free.
Behold, the fierce Egyptians
The Lord will sweep away.
The mighty God of Jacob
Will fight for you today.”

4. The Lord said unto Moses,
“Lift up at My command
Your staff above the waters,
And stretch out your own hand.
Divide the sea, I tell you,
And bid My people go
Across the land, now barren,
Where waters once did flow.

5. “Yes, Pharaoh will pursue you
With all his fearsome host,
But I, with all My glory,
Will silence ev’ry boast.
And Egypt will be certain
That I, your God and King,
Protect My chosen people.
Now blunt is Egypt’s sting.”

6. So Moses, at God’s bidding,
Stretched forth his prophet hand.
The waters, then, God parted.
His people crossed dry land.
The plume of flame came after
To panic Pharaoh’s hoard.
“Retreat,” they cried in terror,
“Before their mighty Lord.”

7. Then said the Lord to Moses,
“Stretch out your hand again.
The sea will close upon them,
Confounding Pharaoh’s men.”
God spared no man of Egypt,
All swallowed by the sea.
But Israel crossed unhindered.
God heard His people’s plea.

8. The people saw His power.
They saw and feared the Lord.
They sang with joy to praise Him,
Their faith in Him restored:
“I AM, the God of Jacob,
Has triumphed gloriously,
For Egypt’s horse and rider
Are thrown into the sea.”