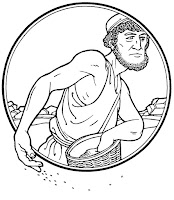 Grace to you and peace from God our Father and from our Lord and Savior, Jesus Christ.  Amen.

There is a dark side to the Gospel: not everyone believes. The Lord will not force Himself on anyone. Some reject His Word and gifts; they are damned. Some hear for a moment but give up when tempted. Some are choked out by worry and greed. There will be a sifting process, a judgment on the last day. God gave us ears so that we sinners would hear His Word and be changed.
Every Christian endures the attack of demons, the temptations of the flesh, and daily trials of the world. No one gets out unscathed. This parable is a warning. The attacks you suffer are dangerous; if you does not abide in the Word of God, you will lose your faith and suffer the fate prepared for Satan and his angels on the last day. Repent. None of us fears God’s punishments as we should. All of us have sinned thoughtlessly.
But there is also good news. The Sower keeps on sowing. He does not look for good and noble hearts. He simply looks for hearts: corrupted, weary, fearful hearts. He sows His Word without regard to how likely it is to take root and grow, for He knows the power is in the seed and not in the soil. He seems reckless, wasteful, to the eyes of men. He simply throws His seed without tilling the soil. He sends out His Word to those who need it, who cannot save themselves, the ones demons would claim for themselves.
The disciples are models of faith here. While they did not immediately understand the parable, they were hearing. They were seeking God. The parable hid God from unbelievers and even damned them; it drew the disciples to listen more closely, to ask Jesus what it meant. They were seeing and hearing what the prophets longed to see and hear. The mysteries of the Kingdom of God were given to them, and through them the mysteries of the Kingdom of God are given to you.
Faith on this side of glory always wants more. The disciples want answers from Jesus. The Christian widow might piously assert that she is at peace because her husband no longer suffers and is at rest; at the same time she longs to join him, eager for the culmination of her faith and the end of her sorrow. We confess that Jesus lives. We are confident that our sins are forgiven. We trust that Jesus is present for us in bread and wine. Even so, we are still being snatched at, tempted, and choked with worry.
The will of God is sometimes hidden from us. The same is true of His Word. We do not understand all that we are given, all that we are promised. Still, we trust by grace that His Word is true. We trust that His is will good and that it is best for us. We will be snatched at, tempted, and threatened by choking worries until we are brought home. The only antidote to that snatching and worry is more: more Word, more Jesus. So God provides a constant and ongoing application of the Word. We cannot stand against God’s enemies. We are weak; they are strong. But He gives us a promise: His Word does not return void; it will accomplish what He sent it to do.
The Word was sent by the Father to become flesh and dwell among us. His Word bore all the accusations against you, all the false names, all the slander. His Word was sent to go to the slaughter, to accept your guilty verdict, to be killed for crimes that you committed. God cannot die. Yet on the cross, God died, and that sacrifice set you free and gave you life. He rose, opening heaven to you. He speaks you righteous. He declares you innocent. Instead of thorns, up comes the cypress. The Lord bears a hundredfold harvest of faith in you. It is a miracle. For to you it has been given to know the mysteries of the Kingdom of God, including the mystery of Holy Supper, where He comes in that human body and blood to join you to Himself. In the name of the Father and of the Son (+) and of the Holy Spirit. Amen.
The peace of God which passes all understanding will keep your hearts and minds in Christ Jesus always.  Amen.