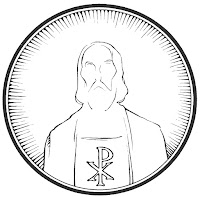 Grace to you and peace from God our Father, and from our Lord and Savior Jesus Christ.  Amen

We have been watching Jesus. The One who humbled Himself to become a true Man in flesh has also revealed Himself as God. We’ve seen Jesus declared as God’s own Son at His Baptism, the Spirit descending upon Him. We’ve seen Jesus turn water into wine. We’ve seen Jesus healing the sick and suffering. And now we once again hear the Father’s voice from heaven, declaring Jesus to be His beloved Son. Jesus is transfigured, radiant in His holiness, right in front of Peter, James, and John. His face shone like the sun and His clothes became as white as light.
In the previous chapter of Matthew’s Gospel, Jesus was talking about His cross. The Son of Man must go to Jerusalem, where God dwelt among His people in the Holy of Holies. He must suffer many things at the hands of the religious powers and the secular authorities. He must be killed, and then, after three days, He will be raised from the dead. Among all these wonders and miracles, this message was more than a bit of a downer. Peter didn’t want anything to do with that sort of Christ. Peter wanted to follow a glorious Messiah, a Savior who would restore Israel, a King who would overthrow both foreign and domestic overlords. That would be the right kind of Christ! This is the kind of religion Peter wanted. That is why He was so overwhelmed by the Transfiguration. If it were up to Peter, they would never come down from the mountain. “Lord, it is good for us to be here!” says St. Peter. Let us stay here and see your glory forever.
That is the sort of Jesus we want, too. The idea of a suffering Savior; the idea of a Church made up of suffering sinners; the idea of repentance; the idea of a cross to pay the price of redemption—all these things are downers. Let us not hear about suffering. Let us do away with all this repentance talk. Let us not speak of the cross or dying, Jesus. We want a happy Jesus, a powerful Jesus, a victorious Jesus. A powerful Jesus will bring about a powerful Church, we think: a Church where Jesus gives Christian congregations growing membership numbers and overflowing bank accounts. But that Jesus on the cross seems to fit all too well in this postmodern age, with a shrinking and closing congregations, with buildings that are falling apart, with membership rosters that are shrinking with the death of the saints and the departure of those who had once been faithful members.
But the suffering Christ is reality. The voice of the Father from above, the bright cloud appearing—it seems like Jesus is supposed to be glorious. But while Jesus is revealed once again as God in the flesh, the Father reminds the trio of disciples that Jesus was there for more than just the glory. “Hear Him,” the Father says. Listen to Him. When Jesus tells you that He has come to die, believe Him. You can’t stop Him, nor should you want to stop Him. He has come to die for you. He has come for your salvation.
Jesus would lead them down the mountain. He would lead them to Jerusalem, to the cross. The disciples were saved. You have been saved. We are saved, but not merely by the bright shining Jesus of the Transfiguration. Our salvation is won by the Jesus who comes down from the Mount and heads for Lent, for Holy Week, and for Good Friday. Moses was gone; the Law could not save them. Elijah was gone; the prophets could only look forward to Jesus. Only Jesus—humble, lowly, suffering, dying—could save them. This is exactly what He said must happen. Listen to Him.
God continues to be glorious, even though He hides that glory. Jesus invites you to come with Him, to receive Him in water, hidden in His Word at the font. He invites you to hear His Word, read to you, proclaimed to you in the pulpit, placed upon you in Holy Absolution. He invites you to receive His body and blood, hidden in His Word in bread and wine. As the Father directed, fix your eyes and ears on Jesus. Now that He has revealed Himself to you, He brings you down the mountain. He suffers with you. He suffers for you and for your salvation, just as He said He must. In the name of the Father and of the Son (+) and of the Holy Spirit.  Amen.