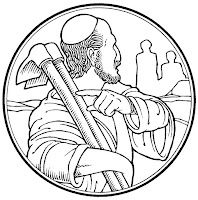 The workers who worked all day wanted more. It made sense to them. After all, they had worked longer than the rest—and much longer than those who started to work at the final hour. It was only right, only fair that they'd get more. It would be foolish of the landowner to give a worker who slaved all day the same as someone who had worked for just an hour. If you do more work, you should get more pay. But they didn’t have a legitimate argument. They had agreed to work for a day’s wage, and that’s exactly what the landowner paid them. These longest-serving workers would have called their union rep if they could. As it is, all they could do was object to the landowner, and the landowner gave them exactly what He promised.
But the Landowner doesn't run His vineyard by what anyone else deems fair. He pays the ones who work all day the same as the loiterers He grabs off the street and puts to work an hour before quitting time. It's His vineyard; isn't it lawful for Him to do what He wants with His Vineyard? From the eyes of the long-serving workers, the landowner was cruel. From the eyes of those hired at the last hour, perhaps the landowner seems generous. Yes, the landowner is that good. His vineyard, His Kingdom isn't about what work you do or how long you have done it. He is not about giving you what you deserve. No, it's much better than that! The kingdom of God is what God gives to you in Christ.
The Lord gives the wages. He gives the gifts. He gives the last worker the same as He gives the first worker. He gives you the same as He gives Jesus. That's how He runs His Kingdom, His vineyard. What a perfect way to start the preparatory season of Pre-Lent! When we put our eyes on what we think we deserve from God for all that we have done for Him, this parable calls us to repent. The Kingdom of God is not about what you do for Him. Turn away from that kind of thinking. If God gives you what is fair, if God gives you what you deserve, you won’t like what you get.
Because the truth is, you are not the long-serving worker in this story. You are the one who has been standing around, pretending you have been willing to work, when in reality you have been comfortable where you are. You have been comfortable in your sin. You have been comfortable in believing that you are worthy of God’s love, His attention, His forgiveness. What you do, what I do, is no more than what we owe to God. You have been standing around, waiting for Him to ask you to do something.
And at the eleventh hour, the Landowner, your heavenly Father, gives you daily wages and more! He gives you Jesus, the One who worked all day in the hot sun for you. He worked Himself to death in the vineyard, bearing the heavy load of your sin in the heat of the day, bearing it on the cross. It was not fair; it was not what He deserved. But He took the wages of sin which He did not earn; He suffered and died the death He did not deserve. He did this to give you the whole day’s worth of God’s mercy. He didn’t even complain about it; He went to His work willingly, so that you could live with Him in righteousness and purity forever. And for the sake of the suffering and death of His Son, our Father willingly calls you His “friend.”
That is the Kingdom of God. It is not about your work. It is not about what you earn or what you have deserved. The Kingdom of God is about a Landowner, your heavenly Father, who gives everyone the same wage: the eternal life earned by the hard work of His Son. Purely by grace He washes you clean of your sin. Purely by grace He speaks His word of forgiveness to you. Purely by grace He feeds you the innocent body and blood of Jesus. What a wonderful Vineyard; what a wonderful Savior! In the name of the Father and of the Son (+) and of the Holy Spirit. Amen.