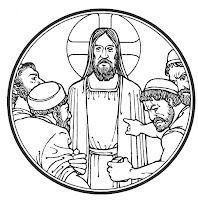 CLICK HERE to hear the audio of the sermon.

A man who is tone deaf cannot fully experience the thrill of music. A man who is color blind cannot fully appreciate a painting or even the beauty of nature itself. A man without taste buds cannot appreciate the nuances of flavor in food. It is the same with spiritual things; there must be a gift that enables us to respond to God and what He says and does for us. That gift is the Holy Spirit.

Holy Scripture has a wonderful way of describing for us the work of the Holy Spirit. The Spirit serves two great functions. He reveals the truth of God, especially Jesus Christ and the Gospel. And then He makes us able to recognize and grab hold of the truth when we hear it and see it. You remember how Luther described this work of the Spirit: “I believe that I cannot by my own reason or strength believe in Jesus Christ, my Lord, or come to Him; but the Holy Spirit has called me by the Gospel, enlightened me with His gifts, sanctified and kept me in the true faith...” All of this clearly means that, without the Holy Spirit, no man can recognize God’s truth when he hears or sees it. And it also means that, if a man shuts the door of his heart against the Spirit of God, then, even when the truth is fully displayed, he is quite unable to see it and recognize it, to grab hold of it and make it his own. These are not matters of the intellect. It is not a question as to whether or not one is smart enough to get it. Some of the most brilliant people ever to live have denied the truth of God, yet a little child can grasp it. It is not a matter of intellect; it is a matter of faith—and faith is a gift we receive from the Spirit.

That brings us to the Gospel appointed for today. The Jews believed they were religious people, but because they insisted on clinging to their own ideas of what faith is, instead of what God had told them again and again, they had drifted so far from God that they had become godless. And it stung them to be told that they were strangers to God. They lashed out at Jesus. They accused Jesus of being a Samaritan: an enemy of Israel and of God. They accused Him of being a law-breaker and a heretic. They branded the Son of God as a heretic! But is there any doubt that it would happen to Him again if He were to return in flesh and confront the churches of this world with their foolish worldliness, with their love for their own ideas and for their clamoring after the praise of men? Of course our Lord answers that He was no heretic, nor was He a servant of the devil—another of the accusations hurled at Him. His only aim was to honor the Father in heaven, while the conduct of His adversaries was a continual dishonoring of God. He says, in effect: “It is not I who have a devil; it is you.”

We prayed with the psalmist, “Vindicate me, O God, and plead my cause against an ungodly nation...” All the power of this world and all of its ill-gotten evidence seems arrayed against Jesus. But Jesus was not looking for honor in this world. He knew He would be insulted and rejected and dishonored and crucified. The work of redemption required that Jesus be abused and mistreated. To save men, He must take upon Himself all the evil that men are capable of working. Yes, even those who accused Him were included, even as we who have denied or doubted Him were a part of the burden He bore to the cross. But Isaiah tells us in a remarkable prophecy of the crucifixion: “When You make His soul an offering for sin, He shall see His seed, He shall prolong His days, and the pleasure of the Lord shall prosper in His hand. He shall see the travail of His soul and be satisfied. By His knowledge My Righteous Servant shall justify many, for He shall bear their iniquities.” That was our Lord’s vindication. He would see that all He had suffered would be worthwhile. He would be the cause of salvation, and the Father in heaven would be pleased in His Son.

But this is also our vindication, for we cannot help but remember that Jesus told His disciples to expect to be treated as He had been treated. Just as Jesus was considered an enemy to His world—and even to the people who claim to believe—so we will face enmity in this world, and maybe even in the Church. Even as they could find nothing evil to pin on Jesus in accusation, so our presence and our life of faith serves as an ongoing indictment against the unbelief of this world, a solemn reminder of what and Who is being rejected. But for us, it is worth whatever it may cost! Whatever we may be called on to suffer in His name, it cannot begin to compare to the glory that shall be revealed to us. For what awaits us is eternal life: life beyond the pain of earthly existence, life that forgets what was before and looks only to that future of permanent glory.

As Holy Week and the culmination of this Lenten season approaches, God grant that we lift up our eyes to see Jesus, the author of our salvation. God grant that we willing bear our crosses—the accusations of the devil, the world, and our own sinful flesh—as we gaze upon the cross of our Lord Jesus Christ. God grant us His Holy Spirit, that we may fully see and rejoice in our Lord’s suffering and death, and the life that we will live because of it, forever and forever. In the name of the Father and of the Son (+) and of the Holy Spirit. Amen.

The peace which passes all understanding will keep your hearts and minds in Christ Jesus always. Amen.