HYMN: The Earth Is Still and Silent 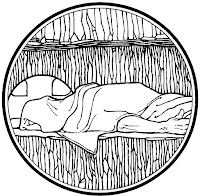 It was nice to get back in the saddle and work on a new hymn text after a brief hiatus. At the appropriate time, Pastor William Weedon posted an ancient homily for Holy Saturday on the Gottesdienst blog, and I thought it had the potential to make a good hymn. I finally had a touch of inspiration that led me to take my hand to it. My first thought was to use the lines "Arise from death, O sleepers!/ I come to give you life!" as a refrain for each verse. As you can see, I did use it in the first verse, but there aren't many useful rhymes for the word "life."

The original text of the homily can be found in the link above. If anyone wants to take a shot at an original tune, I wouldn’t complain. I’ve been heavy on the 76 76D meter and have already (over)used the LSB tunes I like for that meter, so I would appreciate something different. Feedback is love.

The Earth Is Still and Silent

1. The earth is still and silent.
The King is fast asleep.
The Victor seeks the pris’ners
Whom hell had tried to keep.
He says to captive Adam
And Eve, his captive wife,
“Arise from death, O sleepers!
I come to give you life!

2. The cross He carries with Him;
This battle flag He bears.
The darkness flees before Him,
All sorrows and all cares.
But Adam, first-created,
In terror beat his breast.
Christ took his hand in comfort
To calm His child oppressed.

3. “Dear Adam, my creation,
Your God became your Son,
And by My Word of power
I ransom everyone:
The shadowed to enlighten,
To dry the weeping eyes.
For hell no longer holds you.
My sleeping child, arise!

4. “My face still bears the spittle;
My back the whip has scarred;
See here the bloody nail marks
By which My hands are marred.
And see My side. The spear wound,
It proved My dying breath.
Behold, I died to rouse you
From your own hellish death.

5. “The dwelling place is ready.
The banquet is prepared.
The treasure house is open,
And all good things are shared.
So rise from death, O sleeper!
I died to set you free,
And yours is now the kingdom
For all eternity.” 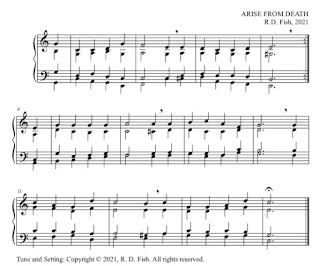