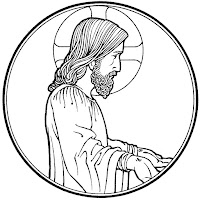 The Introit appointed for this first Sunday after Easter opens with these words, drawn from the first Epistle of St. Peter: “As newborn babes, desire the pure milk of the word...” Centuries ago, when this Introit would have been chanted in Latin, these words would have sounded out as “quasi modo geniti,” meaning, “in the same way as newborn babies...” In the same way as a newborn child will squall its lungs out for nourishment, that is the way we should all long for the sweetness of the Gospel, the forgiveness of all our sins in Jesus Christ. Just like babies demanding to be fed, we should demand to hear the Gospel from our pulpits and the word of Absolution from the mouths of our pastors as from Christ Himself.

In The Hunchback of Notre Dame, Victor Hugo’s famous novel, it happens on the First Sunday after Easter that a squalling child is deserted on the steps of Notre Dame Cathedral in Paris. Incredibly deformed, with a twisted face and a hunched back, this tiny child was such that not even his mother apparently could love him, hence his abandonment. He is taken in, baptized with the name of the day on which he was found, and then raised within the cathedral, to become its bell-ringer. Only within the church could such a grotesque mockery of a man find for himself a sanctuary. I don’t know if Hugo intended to make a theological statement through these circumstances and this name “Quasimodo,” but he did. Quasimodo’s physical deformity is an exact parallel to the corruption of our sinful hearts. By nature, we are as deformed spiritually as Quasimodo was physically.

On the evening of that first Easter, the disciples were huddled together in a locked room, like children who were deserted by their mothers. Spiritually speaking, these men were no more appealing than poor Quasimodo was physically. They were all twisted out of shape by their sin, especially that great sin of deserting their Lord on the night when He was betrayed. They had left Jesus to die on His own, cut off not only from His so-called “friends,” but even from His Father. And, to a man, they were as ashamed of their own sin-deformed hearts and souls as Quasimodo was of his face and form.

It was to these pitiful disciples that Jesus now appeared. When He did, He did not tell them that there was really no problem with what they had done or left undone. He did not say that they could just let bygones be bygones. He did not shrug off their real sin. Instead, Jesus absolved them; He pardoned their transgressions and remembered them no more. He did this with His Word of peace, which comes through the word of the forgiveness of sins—“for where there is forgiveness of sins, there is also life and salvation.” The Lord Jesus sought out His fallen men while they were still hiding and said, “Peace be with you.” And to help them believe that His absolution is true, He showed them His pierced hands and side—the very things that make for peace with God: the wounds that satisfy the penalty for all the sins of the world.

My brothers and sisters in Christ, much like those fearful apostles, we wallow in our guilt and shame, hiding behind the shuttered windows of our souls. Spiritually speaking, we feel like poor Quasimodo: terminally deformed by what we have done and by what we have left undone, permanently deformed by what we are as sinners by nature. The very last thing we need to hear from each other is such fine and false counsel: “Don’t worry, you’re not so bad, compared to some others.” Or: “That’s all over and done. Just forget about it.” That poisonous whitewash supplied by human reason to our sins only inflames or hardens our conscience. We need to hear Christ Himself say, as He does through the mouths of His servants: “I forgive you all your sins, in the name of the Father and of the Son and of the Holy Spirit.”

This word of forgiveness, which we call Holy Absolution, is the pure spiritual milk of the Gospel, flowing freely from the grace of Christ to quench our guilty thirst with the forgiveness of sins. This word of Christ’s Absolution is what we need. We should concentrate upon it, cherishing it as a great and wonderful treasure to be sought out and accepted with all praise and gratitude. And this pure milk of forgiveness, when gratefully received, will also wash over those who sin against us, for He calls us to we share it with them out of gratitude for the forgiveness of our own sins.