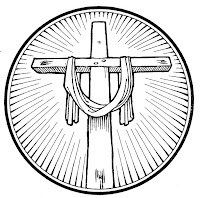 Christ Jesus lay in death's strong bands
For our offenses given…

Jesus was dead. He was wrapped in burial cloths. He was sealed in the tomb, and the religious leaders of the Jews had set a guard to prevent any funny business on the part of the followers of this carpenter Rabbi from Nazareth. Throughout the season of Lent, we heard how Jesus went to the cross as the Savior sent from the Father—sent to suffer and die as the Sacrifice, the Scapegoat who would suffer in the place of sinners. The deed was done. Pilate sentenced Jesus to death, and our Lord went willingly. So yes, Jesus was dead and buried. His tomb was sealed. The guard was in place. It seemed as though the story was over.

No son of man could conquer death,
Such ruin sin had wrought us.
No innocence was found on earth,
And therefore death had brought us
Into bondage from of old
And ever grew more strong and bold
And held us as its captive.

Many sinners had died; that is the lot of sinners. And Jesus, though He was not a sinner, “was made sin for us,” so He had to die, too.

But Jesus didn’t go to the cross and death as one claiming to be a victim of circumstances beyond His control. He didn’t go kicking and screaming, proclaiming His innocence to anyone who would listen. Pilate already knew the truth; he knew Jesus was innocent, and yet he convicted Jesus anyway. The religious leaders who screamed for His crucifixion already knew the truth; they knew Jesus was innocent, but that only increased their rage. And, of course, Jesus knew He was innocent. That was the whole point. An innocent Man had to die, one Man to die without spot or blemish as the perfect Offering to pay the price for all of creation. With perfect understanding, Jesus knew what would happen to Him; with perfect love, He went willingly.

Christ Jesus, God's own Son, came down,
His people to deliver;
Destroying sin, He took the crown
From death's pale brow forever:
Stripped of pow'r, no more it reigns;
An empty form alone remains;
Its sting is lost forever.
Alleluia!

The prophet Isaiah, by the power of the Spirit, foresaw what would happen. “He will swallow up death forever, and the Lord God will wipe away tears from all  faces; the rebuke of His people He will take away from all the earth; for the Lord has spoken.” Centuries before the main event, God revealed His playbook. He told the devil exactly how the battle would be won, and Satan soutght to outsmart God…by doing exactly what God wanted: the devil worked to bring about the death of the Son of God.

It was a strange and dreadful strife
When life and death contended;
The victory remained with life,
The reign of death was ended.
Holy Scripture plainly saith
That death is swallowed up by death,
Its sting is lost forever.
Alleluia!

Here our true Paschal Lamb we see,
Whom God so freely gave us;
He died on the accursed tree—
So strong His love—to save us.
See, His blood now marks our door;
Faith points to it; death passes o'er,
And Satan cannot harm us.
Alleluia!

And, just as the Father planned, just as Satan wanted, Jesus died. What a “strange and dreadful” battle, indeed! Our Lord did not vanquish death though an act of almighty power, but by becoming “obedient to the point of death, even the death of the cross.” Now “Death is swallowed up in victory.” Death passes over us, powerless. Satan groans in agony, the cross impaling him. And the graves of the faithful will lie empty forever.

So let us keep the festival…

Then let us feast this Easter Day
On Christ, the bread of heaven;
The Word of grace has purged away
The old and evil leaven.
Christ alone our souls will feed;
He is our meat and drink indeed;
Faith lives upon no other!
Alleluia!

In response to this great victory, how, as Luther urges us, do we “keep the festival?” There is only one way: celebrate Easter in repentance and faith. When our Lord rose up from tomb, He left the sin of the world buried in that desolate cave. Through the washing you received in the waters of Baptism, that’s where your sin belongs. So confess your sin. Turn away from it; leave it dead and buried in our Savior’s tomb; it no longer belongs to you. Look in faith to the crucified and risen Christ, because His last will and testament is yours. Keep the festival by feasting on His body and blood, trusting that you receive the blood-bought forgiveness of sins in this New Testament Passover feast; trusting that He joins Himself to you; trusting that, because He lives, you shall live. “Thanks be to God, who gives us the victory through our Lord Jesus Christ.” ALLELUIA! CHRIST IS RISEN! He is risen indeed! Alleluia! In the name of the Father and of the (†) Son and of the Holy Spirit. Amen.