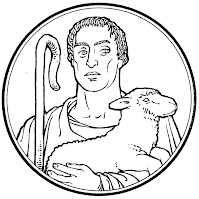 Nobody Does It Better

We all like to have others recognize the quality of the work we do. And most of us, I suspect, strive to do the best we are able with whatever we do. Many people are good at their work. But how many of us are so good at what we do that no one else could do it as well as we do it? Such people are truly exceptional, and their names are a matter of fond historical memory: Martin Luther, Johann Sebastian Bach, Michael Phelps, Usain Bolt, Vincent Van Gogh—perhaps you would name others. And yet, even these exceptional individuals did not do all that could be done. There has always been someone to carry the work and take the next step.

There is One, however, who needs no successor, no one to complete His work. He is the Good Shepherd, our Savior, our Lord Jesus Christ. He is unique, in a class by Himself. Others have also been shepherds, and there are still spiritual shepherds today. The prophets shepherded God’s people before Jesus came in flesh, as did the apostles in those early years after the ascension; pastors have providing shepherding care to Christ’s flock ever since. But none of them have been able to replace Jesus, for He is in a class by Himself. He was the only One who could lay down His life for the salvation of His sheep.

Many have given their lives for others. History and legend record many heroic sacrifices. Some are especially inspiring and noble. Some acts of personal sacrifice are widely known; some are known only to a few; some are known to God alone. We know of firefighters and police officers who rushed into the World Trade Center, giving their lives in the attempt to save the lives of people they never met. We know of soldiers who leapt upon grenades to save their brothers in arms. Lives have been lost saving victims of fires and drowning and other tragedies. Unsung individuals have sacrificed personal advantage and material comfort helping the poor, the homeless, the hungry, and the oppressed.

Such sacrifices deservedly draw our attention. But no sacrifice approaches that of the Good Shepherd, who laid down His life for the sheep. No other sacrifice cost as much as His. No other sacrifice accomplished as much as did the Good Shepherd’s. These days, we are able to extend life to eight or nine decades or, at times, even a bit more. He saved lives for eternity. He died so that uncountable precious human lives and souls may live forever. The Good Shepherd laid down His own wonderfully precious life for the sheep, redeeming them for a glorious eternity.

Jesus is the Good Shepherd who was sent by the Father. He has the Father’s endorsement for all He does. He says: “Therefore My Father loves Me, because I lay down My life, that I might take it up again...This command I have received from My Father.” Jesus is the Christ, which literally means “the anointed One.” He was the One selected by God the Father to redeem us and all of this world by offering the perfect sacrifice of His own precious life on the cross. In the Lenten season just passed, we sang the hymn “A Lamb Goes Uncomplaining Forth.” Remember these words:

This Lamb is Christ, the soul’s great friend,
The Lamb of God, our Savior,
Whom God the Father chose to send
To gain for us His favor.
“Go forth, My Son,” the Father said,
“And free My children from their dread
Of guilt and condemnation.
The wrath and stripes are hard to bear,
But by Your passion they will share
The fruit of Your salvation.”

“Yes, Father, yes, most willingly
I’ll bear what You command Me.
My will conforms to Your decree,
I’ll do what You have asked Me.”

The Lord Jesus did what He did because He was sent. His entire ministry bore the imprint of that sending. On two pivotal occasions, the Gospels record that the voice of the Father was heard, endorsing the words and work of His Son. And when His Son’s precious lifeblood flowed out on the cross, the Father shook the earth and darkened the sun, causing the Roman centurion to conclude: “Truly, this was the Son of God.” And the Father’s final endorsement of His Son’s redeeming work came conclusively and explosively when He raised Jesus from the grave, and the resurrected Lord appeared before this world in triumph.

Jesus said, “I am the Good Shepherd.” He carried out the Father’s will in this world, which is why we can be confident that our salvation is both complete and certain, and that we now stand as the sons and daughters of the kingdom, free from sin and eternal death. We need never worry about our standing before God; in Jesus Christ, God Himself has given us the Good Shepherd. And so we end as we began. We have Him who has no successor, who needs no one to finish His work, no one to take His place. Jesus calls Himself the Good Shepherd. And we who hear His voice have found Him to be exactly what He claims to be. He is the good Shepherd who lays down His life for His sheep. ALLELUIA! CHRIST IS RISEN! He is risen indeed! Alleluia!